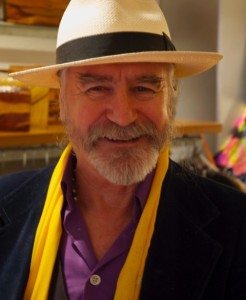 Abraham Lüttger was born in the second World War (1944) in the heart of Amsterdam, close to the Anne Frank House. He studied at the Institute of Graphic Design (Amsterdams Grafisch Lyceum) and the Gerrit Rietveld Art Academy. After his graduation he worked for several years as an art director.

Midway the seventies (1977) he left the applied arts and returned to the individual free arts, painting, photography and etching.
His first exhibition abroad was in Germany (West Berlin)  Berlin Period. In 1988 he was one of the first Western artists who was invited for an exhibition (Painting’s & Photograph’s) in Moscow during the Perestroika at the Central House of Artist’s. Well attended exhibition’s followed in New York, Tokyo, Paris, Madrid, Warsaw and of course in his native city Amsterdam.
In the artist’s life his Heart Period (1990 – 2000) was more or less a dramatic one. His mother Johanna died, he lost his lover, a close friend died of a heart attack and even a new passionate love disappeared. Painted straight from the heart this period shows -during this difficult time in his life-how he came to terms with both joy and sorrow.